{A natural potency that is undeniable to the naked eye. Something or someone that has an exuberance surround them that not everyone has.}

As I recount my experience in Croatia I am reminded of the Croatians zeal for life.

The aura that surrounded me as I wandered the streets, conversed with fellow hostel goers, and sat with with locals and listened to their stories was inspirative.

When I flew into Dubrovnik that Saturday afternoon I had no idea what to expect or what I would learn. It was the first stop of my sixteen day solo trip before returning to the United States and thereupon drawing an end to my two years traveling and living abroad.

I was unaware I was stepping into a recently independent country, one stricken with war just two decades ago, or that it’s small size, incredible cuisines, and relative unknown-ness would wrap me up in its arms and embrace me warmly and without assumption. 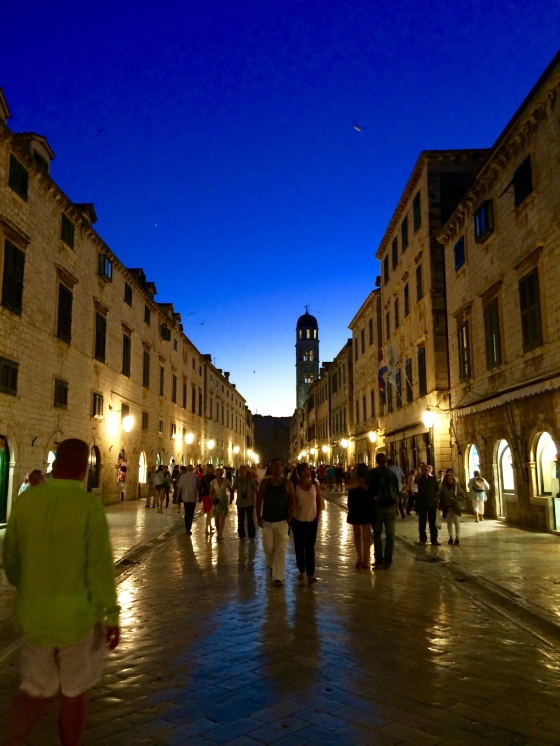 Croats seem to be unconcerned with material things or capitalizing on the tourist dollar. They don’t need more than what they have right now and all of them, noticeably blissful.

I arrived in the capital city of Dubrovnik and took the 20km airport shuttle into the city. I arrived at Pile Gate and walked to my hostel located just outside the Old City walls. This particular hostel was not the fanciest of sorts but I chose it because of the reviews and great location. True to previous travelers ratings the hosts were amazingly accommodating and generous, they were particularly helpful with allowing me to leave some things with them for a few days while I went north to Split.

I later learned that the hostel had served as a bunker during the War of Independence* in the early 90’s. It was then that I understood it’s cave-like and windowless accommodation, and to which I was able to develop a deeper connection with Croatia’s recent history.

I spent most of my hours meandering the narrow paths of the Old City over the course of two days. My first night I visited Veritas for a juicy steak covered in gorgonzola at the recommendation of my hosts. I dined alone and thoroughly enjoyed watching people pass through the small plaza and others discover the history of the statue situated directly in front of me. Dessert had just been set on the table when a sweet Aussie girl came up and asked if I was dining alone. I replied with a smile and “yes” to what end she invited me to join herself and her sister at their table.

Those are the moments that remind me of the inherent kindness and social nature of humans, no matter where we come from or what we look like we want to be together.

I happily joined them and we shared our travel stories, triumphs and mishaps, before heading to the infamous Buza Bar, situated on the rocky cliffs just on the outside of the castle walls, for a late night drink. 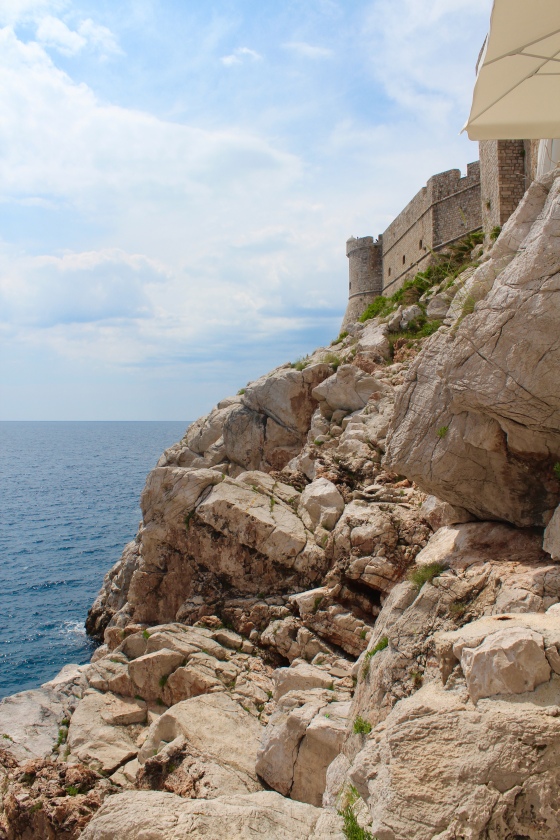 I would also end up there a few days later for some afternoon boat watching and reading. 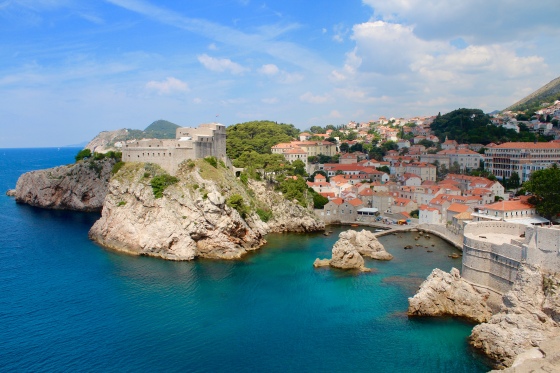 After an evening with new friends I woke the next morning prepared to make the ‘trek’ on top of the Old City. The UNESCO World Heritage Old City wall is fantastic and provides excellent views of Dubrovnik and the sea. Dubrovnik’s established moniker of “Pearl of the Adriatic” is befittingly perfect and I couldn’t think of a better way to describe it than as such. You can easily find reminders as you shop in pirate themed candy shops and nautical clothing boutiques specializing in striped-clothing only.

There are also multiple churches of different styles to gawk at while you take in the red-roofed tops and spot hidden passageways below, methodically memorizing their location for later exploration. 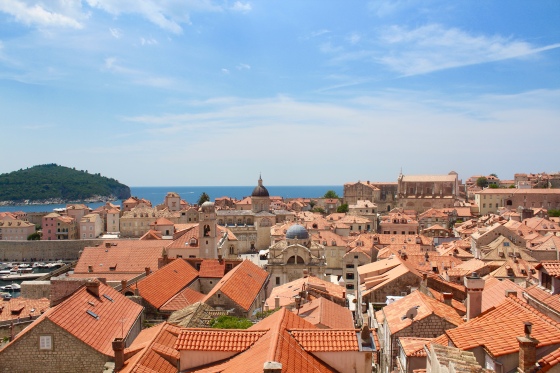 One of my favorite things I did while in Dubrovnik was take the cable car to the top of Srd Hill. Not only was I treated to the best panorama of the city, but also the Museum of Croatian War of Independence. The museum provided a short and thorough chronology of Croatia’s quest for independence and put you directly in the footsteps of where soldiers stood not so long ago to protect the fragile and historic Old City.

Situated at the cable cars landing there, of course, is also a restaurant where you can enjoy mediocre food and a decent glass of wine as you sip your way into a beautiful sunset.

Dubrovnik is situated in the south of Croatia and as I had planned to see much more of the country I took the new, high-speed five hour ferry to Split, located about half way up Croatia’s coastal border.

Split is the second largest city in Croatia, yet, it’s layout and every things proximity to the marina, made it feel like another small town to me.

My original plan for visiting Split was to  take a day trip to the Plitvice Lakes National Park, but upon my arrival to the tranquil city I decided to spend my time relaxing on the beaches and exploring the markets instead. I had also been told about a closer destination, Krka National Park, but again decided to stay in Split. I suppose this means I’ll have to return Croatia someday… 😉

The hostel I stayed at in Split is definitively the most at home I’ve ever felt in a hostel.

The girl who checked me in was from Washington State, the first indicator I would be comfortable, and by the time I left the hostel two days later I had met the girl who would become my new roommate as I move to New York City this fall. I guess the stars had aligned in my favor while in Split.

My first day started with a morning run to a viewpoint overlooking the entire marina. After picking up some berries at the local outdoor market I decided it was time to get a little vitamin D and a local pint of Ožujsko where the locals, and, well everyone else, hangouts at – the beach. 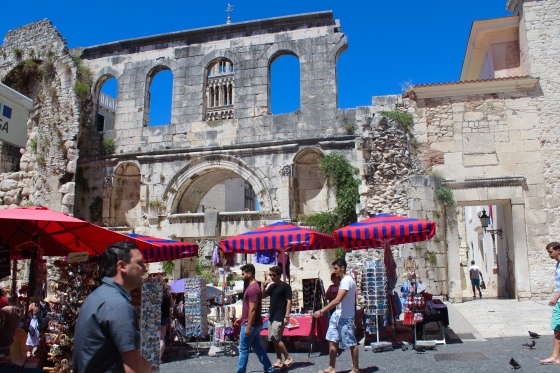 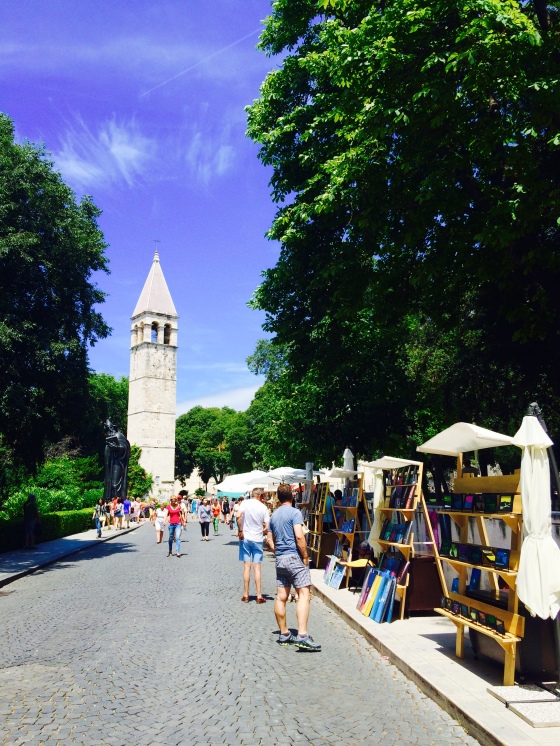 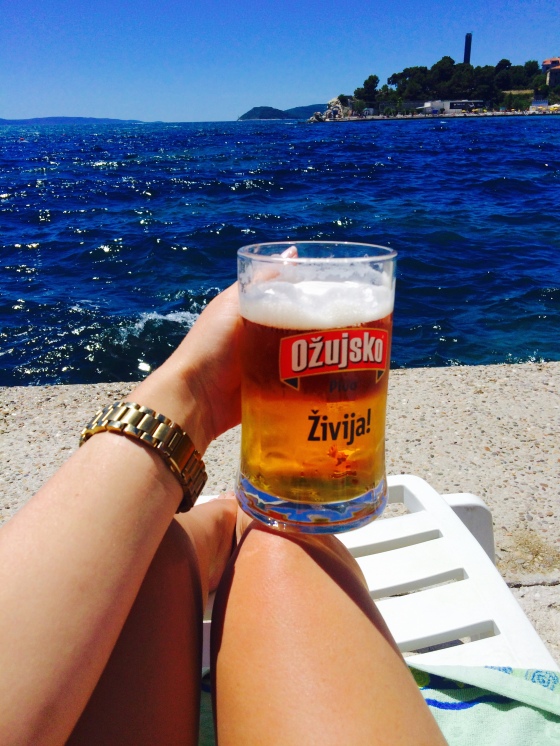 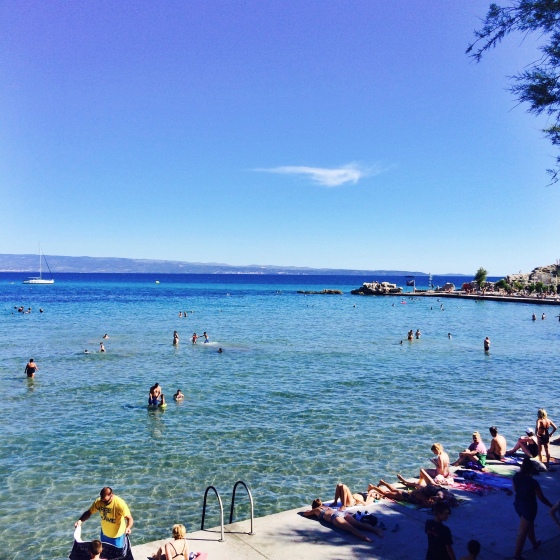 I opted for the bigger, crowded beach the first day to take advantage of the lounge chairs and service staff. The crowds were mostly condensed on the small sand beach so I sat further down the bay where quietness became more ample. Hours later I was (un)successfully sunburned… oops.

The second day, along with extra sunscreen, I went to a recommended spot only known by me and the recommenders as the ‘rocky beach.’ It’s a small ledge of rocks and a pathway, that curves around the nooks and crannies of the coast and drops into the sea. I loved it.

I picked a rock and enjoyed the rays. It was peaceful and simple, it felt like exactly what I had come to Croatia to see. 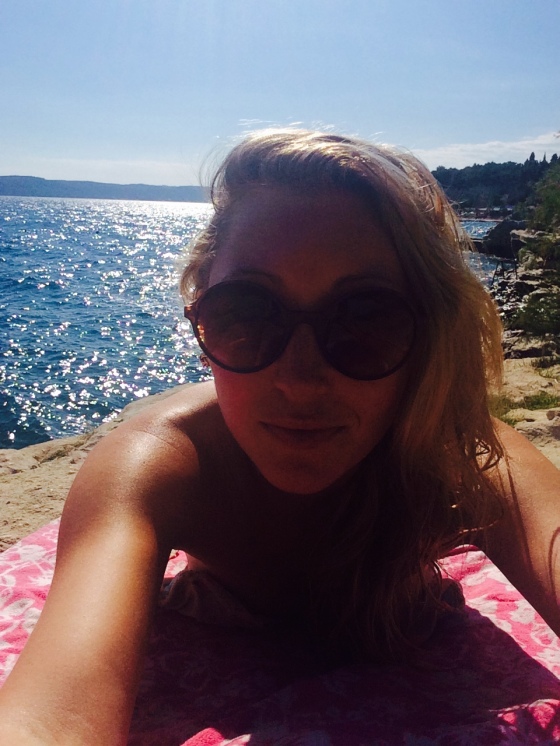 Jumping from the rocks into the cerulean blue waters below, floating unnaturally buoyant on the salty waves and letting them push you back to shore, will always be something I yearn for until I can do it again, and then again.

While I wish I could have lain along the rocky coastline forever, after spending time with great company and learning about the regions recent disputes, I knew I needed to see more. I only had one day and had to choose between the nearby countries of Montenegro or Bosnia and Herzegovina for a day trip outside of Croatia.

I chose the picturesque Bosnia and Herzegovina, rich with history and strife with heartache from the war of ’93, where clashes between it’s own people (Serbs who favored staying with the Yugoslav Federation and Bosniaks and Croats who sought independence) left many dead and the country injured from the inside out.

I had gone to Mostar to see the Stari Most bridge, which stands as a symbol of resilience and togetherness, yet, when one arrives in person and talks to the locals you find that it actually separates the Muslim population, confined to the left bank, and the Bosniak population on the right. 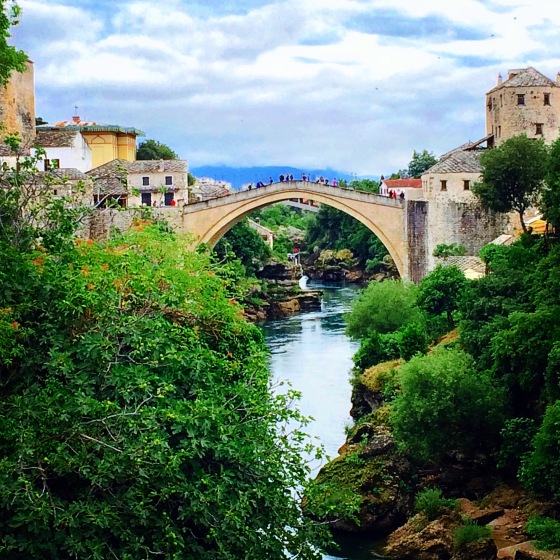 The bridge itself is beautiful and a wonderful work of architect Sinan and a UNESCO World Heritage site. It had to be reconstructed after the clash for independence and one can only hope that the bridge will join the two sides again one day instead of represent mistrust and uncertainty. 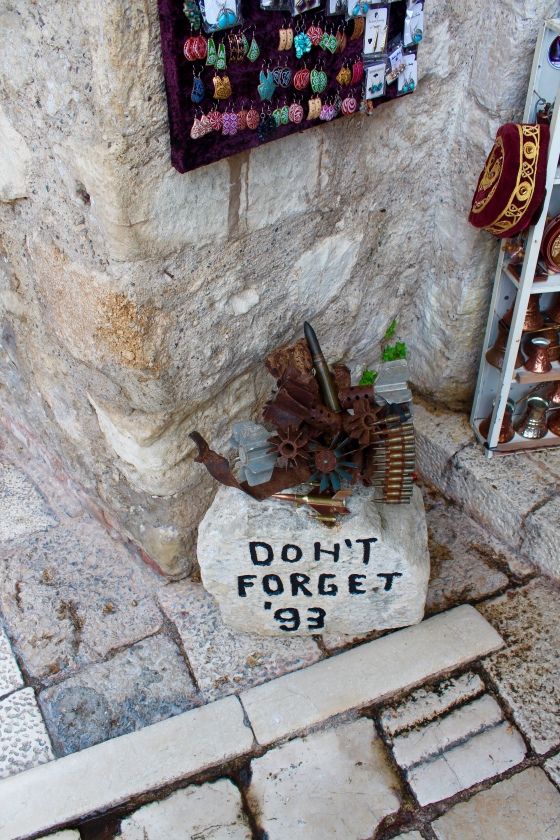 Despite the recent history, the people were so genuine and kind. I happened to eat one of my favorite meals here, as well. Our driver had mentioned Sadrvan for a meal that was conveniently located to the bridge and the most authentic in the area.

Inka, the hostess and now owner (I believe) after her father passed during the war made sure I was well attended to and brought me all of their best dishes and drinks! Yum. I even left with a box full of sweets to bring home. 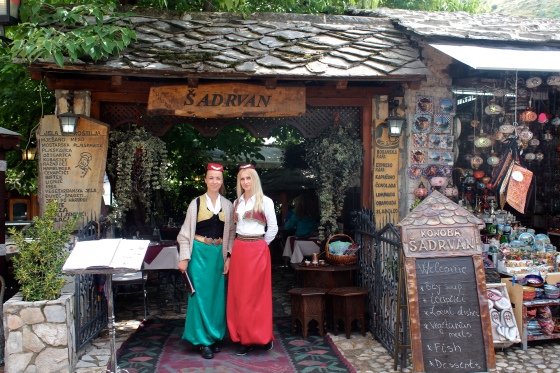 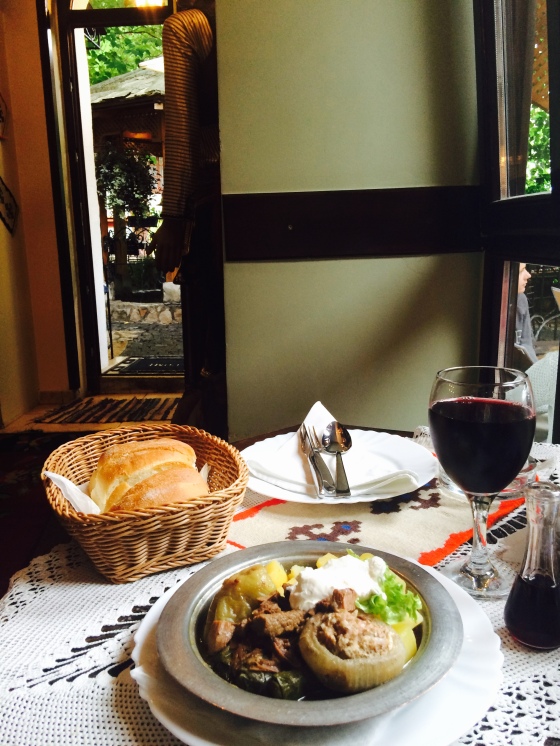 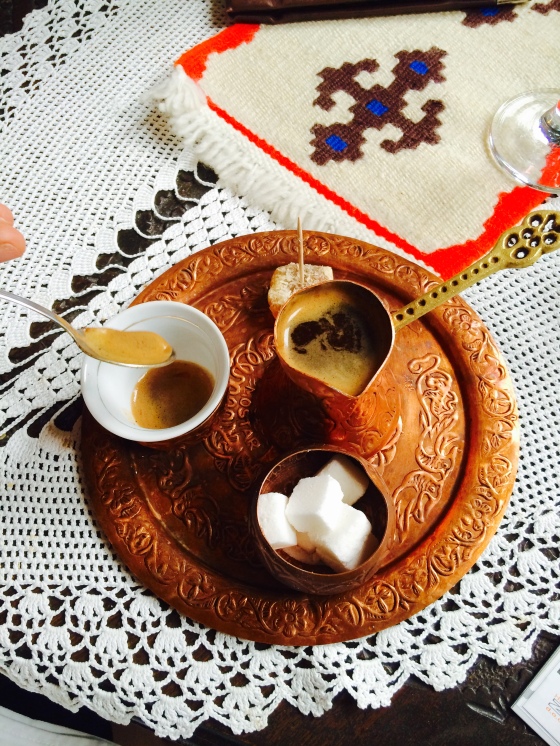 The drive back to Dubrovnik left me eager for more time in Croatia and the surrounding countries, which I knew I didn’t have. I spent my last evening in Croatia sitting down by the water enjoying conversation with new friends, each of us speaking about our futures, where we were going and where we had been. Looking back it seems to have been the perfect way to end my short five days among the Adriatic coastline.

The Croatian people are truly some of the most hospitable I’ve come across and I plan to meet them again someday. 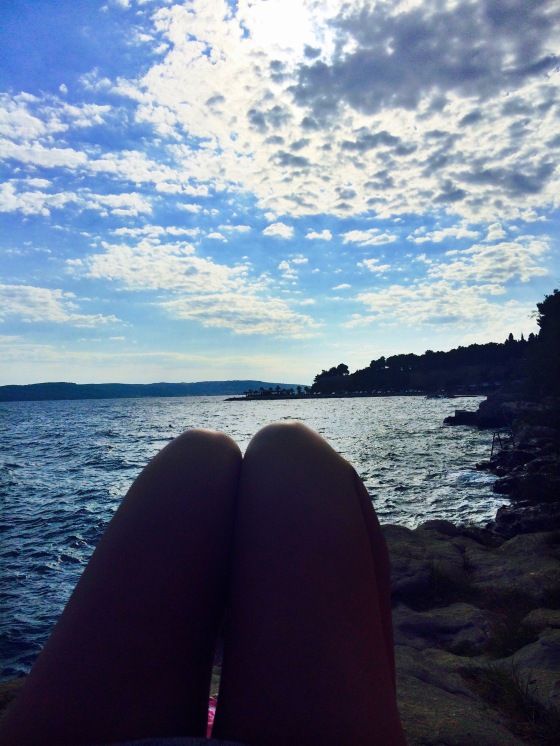 {If you ask for too much at once, you will come home with an empty bag. -Croatian Proverb}

The Croats exude this concept of life and I believe it is an important reminder to us all.

*[From 1929 to the early 1990’s Croatia along with Montenegro, Serbia, and Slovenia formed the Kingdom of Serbs, Croats, and Slovenes and known as Yugoslavia. The Croats are overwhelmingly Roman Catholic and more Western-influenced than the Serbs, who are overwhelmingly Eastern Orthodox, and Bosniacs constitute most of the Muslim population. In June 1991, the Croatian parliament passed a declaration of independence from Yugoslavia. Six months of intensive fighting with the Serbian-dominated Yugoslavian army followed, claiming thousands of lives and wreaking mass destruction. Croatia joined the European Union as its 28th member state on 1 July 2013.] Britanica