I spent 48 hours in Yangon, Burma this past weekend and it was one of the most refreshing experiences I’ve recently had as a traveler. I was there for the wedding of my lovely friend Pan and her fiancee Ryan, and what a celebration it was!

Being in Burma I was once again the novice traveler; I didn’t know how much a taxi was, the exchange rate, where to eat, where to go, or what to see. I was completely at the hands of Burma and its’ people. It was after we were greeted at the airport by members of Pan’s family, and riding in the taxi to our hotel, that I realized this. Looking around me I had no idea which direction, how far we were going, or how much it would cost. The last time I truly felt like this was the first time I traveled overseas alone and had no idea what to do. (Notably, it was this same trip overseas in 2009 that introduced me to my friend Pan!)

On this weekend in Burma, however, it was quite a liberating experience as it reminded me that THIS is the reason; the why, I travel…

View from Pan’s home the morning of the wedding.

Of course, I wasn’t completely at the mercy of this interesting country; my friend Sarah and I were being taken care of by Pan and her family, as were all of the guests who attended the festivities. I can’t thank Pan and her beautiful, loving, family enough for the wonderful time they showed us all.

Burma or Myanmar? At the time of my visit I still wasn’t sure which to use. After doing a little research I’ve decided to go with Burma based on the US Department of State’s website. The former military government had changed the name to Myanmar in 1989, but for policy reasons, the US continues to use Burma as the official country name, and so I will do the same. There is a lot of history within and surrounding Burma, it’s government, and it’s people. This blog, however, is about a wonderful occasion and the fun we had celebrating it!

Arriving in Burma – the airport was kind of like a ghost town. I think it would have been even more empty had the 27th Sea Games not been going on. Thinking back now, and also noticing this same behavior on our departure, I realize that this is a reflection of how untouched Burma is by the outside world. I literally could have counted all of the people in the small international terminal. It was kind of nice. Secondly, when you need to exchange money – it’s handled on the street, at least for us it was. We walked outside the airport and there was a lady with a blazer on. I needed to exchange Thai Baht for US dollars as that was the only currency our hotel accepted payment in. I gave her 5,000 Thai baht and she gave me $147. I only lost $3 to fees which was a great deal! I also needed to grab some of the local kyat currency, however, so I handed over another 2,000 baht. This exchange was a very poor decision…. while I should have received appx. 61,000 kyat (pronounced ‘jet’) back I only received 36,000. The Burmese do not want Thai baht, apparently. Lost some money on that deal but sometimes when you travel, that’s just the way it is. You win some, you lose some. There is also a long history between Thailand and Burma, not that I’m sure that had anything to do with it.

Our drive to Pan’s home was not long, perhaps 25 minutes with traffic. Most of the guests had arrived on Thursday so we were two of the last to appear. We were treated to a wonderful home cooked meal of curries, meats, morning glory, rice, and tea. 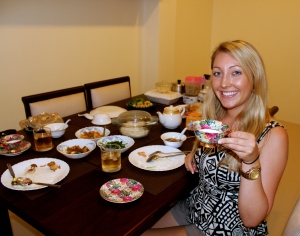 As we were eating, a few of our friends showed up to the house to get fitted for the Burmese traditional dress they would wear during the wedding ceremony. We were curious what everyone would be wearing so we wandered upstairs to steal a glance; we also hoped we would have enough time to find our own Burmese traditional dress. Luckily, we didn’t have to go far. Pan’s sister, Sue is a designer and happened to have exactly 2 Longyi’s left! Not only that, they fit us just right! Double lucky. We would be ready to look our best for Saturday morning now, along with everyone else who would don the Burmese dress.

After our fitting, and a second (yes, second) delicious lunch with the whole group we headed to our hotel to change for the evening. Friday night the whole group was finally together and ready to celebrate Ryan and Pan. Roughly 60 of us joined for dinner on the eve of the big day. We ate at Golden Duck, a very good Chinese Restaurant near Pan’s home. As in Chinese tradition we ate family style and were stuffed like ducks (hehe, sorry) by the time we left. At the close of the night a few of us returned to our hotel and had a drink or two together. We kept it pretty light and mostly caught up on the last 4 years of each others lives. We knew we had to be up and moving at 6am the next day to ready ourselves for the 9am ceremony; and since we are now older and wiser, we are slightly better at recognizing when a hangover isn’t worth it.

Pan and I at Golden Duck.

The girls ready for the ceremony!

The ceremony was absolutely beautiful. It was held at the Sedona Hotel in the Grand Ballroom. The ceremony was short and sweet, yet, traditional. The bride was stunning and so were the families. Everyone sat around tables which were decorated with tea and coffee. On the wall a slide show of Pan and Ryan played – showing the relationship through various photos taken all around the world. Prior to the bride walking down the isle each of us were served a small plate of delicacies which were to be enjoyed throughout the ceremony. 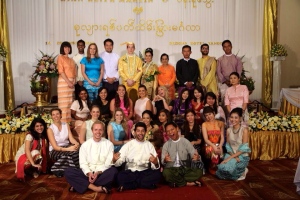 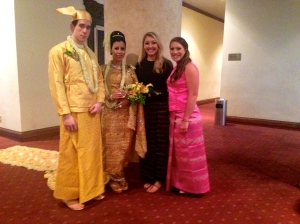 After the ceremony we had a few hours to ourselves before the evening reception – reserved for the closest 150 guests. 🙂 Sarah and I decided to spend our time visiting the Shwedagon Pagoda – one of the most famous sites in Burma and biggest temples in the world; it is said to enshrine hairs of the Buddha. Our new friend Abhi, and Pan’s friend from India, decided to join us on this excursion. 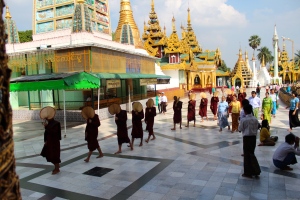 Abi and I are Monday baby’s. We poured water over the Buddha as a sign of respect and cleansing.

Pouring water over my Burmese zodiac animal. The Tiger. 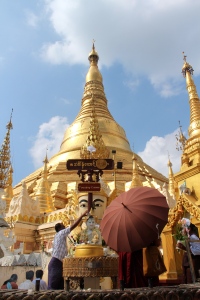 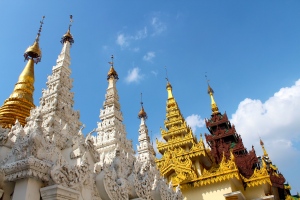 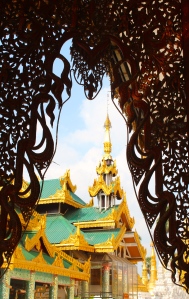 After spending the delightful, and very warm afternoon, roaming the temple grounds, sitting and resting to take in our surroundings, and snapping many photos; we headed off for a light afternoon snack. Abi found Acacia, an old British themed restaurant and cafe, not too far away. We took a cab for about 2,000 kyat, or roughly $2. Among the three of us we shared a few pastries and then made our way back to our hotels to prepare for the evening.

Burma at dusk from our hotel room.

Once our designated meeting time of 5:30pm in the lobby rolled around we were dolled up and ready to go, waiting patiently for our van and taxis to arrive. Some of us squeezed in the van Pan’s family had rented for the weekend event while the rest of us jumped into two cabs. We were headed to Inya Lake Hotel for the evening.

What a beautiful bride and reception! What a meal! What a downpour of rain!

The reception, as expected, was gorgeous. The food was a delicious three course meal, and the guests were dressed to the nine’s in their black tie attire.

The stunning bride and I.

Upon finishing the main course our entourage of Cesar Ritz alumni and friends were asked to the front to say a few words for Pan and Ryan. We each introduced ourselves and the country we were from. We all joked that it sounded like the Miss Universe contest. We gave the happy couple our warm wishes and thanked them for giving us this opportunity to reunite. Our weekend in Burma was a truly wonderful one and we had to end it right. First, a little ‘good luck’ rain joined the party, though.

After dancing in the rain!

A downpour of rain scurried all of the guests inside. Us ‘kids’ decided to keep the party goin’ and kept on dancing – at least for a while. Once we were thoroughly drenched we decided enough dancing had been done for the time being. Pan moved the party to her house and the happy celebrations once again, continued! We drank, laughed, and chatted the early and late evening away. Then, it was time to make our to the club. 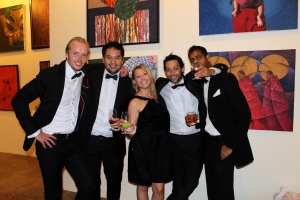 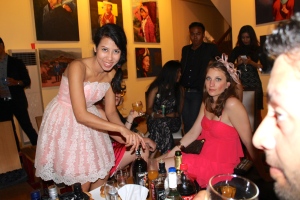 My time in Burma was so very short, but so very sweet.

I hope to visit again soon as there are so many places we were unable to visit during our short stay. Bagan, I know is a must see. My only wish is that I am able to see the many more beautiful people and places before they become touched by the hand of tourism.

Part of the allure of Burma is that no one yet knows they should be trying to sell you a T-shirt or trinket of some sort when you wander by. Because it is untouched, you truly get to experience the culture as it is, and as it has been.

One thing I will always remember is walking through the Shwedagon Pagoda and being amazed by it’s beauty. All around me were Burmese people – not busloads of tourists from other countries, or tour guides instructing them. Just the Burmese. As a traveler, this was somewhat surreal to me as it is so rare to only be surrounded by what you came to see.

While I was taking photos of them, they were taking photos of me. It was quite a different experience. I realized I may well have been one of the few caucasian people they had ever seen. Soon – I suspect, they will be seeing many, many, more.

One thought on “48 Hours in Burma: Many Hours too Few.”